October is my favorite month. Here in Minnesota, it means perfect weather for dicking around outside with a sweatshirt on and huddling around backyard fires in the evenings. It is my birthday month. And of course, it contains the greatest of holidays, Halloween. Each October, I do my best to watch some manner of horror film each day. This year will be no different, except that I’ll curate my choices a bit more carefully, sort of like a mixtape. And like any good mixtape, you’ve got to set the mood (pretty sure I just stole that from Nick Hornby) before you start in with the bangers.

So in the spirit of Halloween and mix tapes, two of my most favoritest things in this world, here’s a short list of gothic tone-setters to get October off to a properly spooky start.

Undead Templar Knights stalk the cursed grounds of an abandoned monastery in the Spanish countryside. The Templars are blind and plodding, stalking their prey like tireless, acrid smoke rolling through the ruins. This is true gothic horror, like the feeling you get running through an old graveyard at midnight. It builds steam at a glacial pace, feeding off of fear and anxiety of the unknown. The climax is equal parts horror and beauty, as the wraiths pursue their fleeing victim on horseback, racing against the approaching dawn. It’s an exasperating feast for the senses, not dissimilar to the ending of the original Texas Chainsaw Massacre. This movie knows how to cull forth the stuff of nightmares.

It’s hard to explain why this is such a creepy fucking movie without ruining it. If you’ve never seen it, don’t let this October pass you by without doing so. And watch it with friends, cuz it’s that fucking good. Seriously, it’s a goddamn crime that this film is so slept on. Anyway, Dead and Buried opens with a photographer getting inexplicably mobbed and eventually murdered by the townsfolk of a small seaside village called Potter’s Bluff. It’s the kind movie that shows you most of its hand as it follows the local sheriff attempting to solve this and subsequent murders. So we the viewers know who’s committing them, and we know what the sheriff knows, which is increasingly more terrifying as the film progresses. It’s like watching a head-on collision in slow motion, building exquisite dread right up to the very last moments of the film, when it just completely mindfucks you. 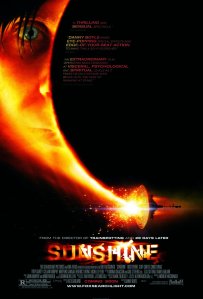 Danny Boyle’s 2007 Scifi/Horror/Suspense film is about a team of scientists sent into space to jumpstart humanity’s favorite dying star with a fission bomb, thereby saving earth. So the stakes are pretty macro here, but they get small real quick when shit starts to go wrong. Cillian Murphy’s protagonist Robert Capa battles existential angst, mechanical failures, and plenty of crew members starting to go coconuts. Then things start to go wrong. Sunshine is a quiet, visually beautiful film that plays its good horror stuff pretty close to the vest. It also straddles the line between the natural and the supernatural without holding your hand and telling you it’s going to be alright. Because it definitely is not. Or… is it?

Akira Kurosawa, master of the Samurai Epic, adapted Macbeth. This film is an atmospheric titan, delivering Shakespeare’s spooky cautionary tale in gorgeous, high-contrast black and white. All the treachery, greed, and supernatural horror of Macbeth seem perfectly suited to Kurosawa’s feudal Japan, a world of violence and mystery. The performances and makeup are presented in broad strokes, lending the feel of a Greek Tragedy to this adaptation. Some of the imagery in this film has actually appeared in my own personal nightmares. Yikes!

Hour of the Wolf is Bergman’s exploration of solitude, and the demons of repression it brings forth. Max Von Sydow is a young artist vacationing on a remote Swedish island with his pregnant wife after an unexplained traumatic event. As the film opens, she is ominously detailing his descent into madness. We are then presented with the pieced together tale of a man grappling with his own unraveling sanity. Von Sydow’s Johan Borg is approached by a revolving cast of strange and mysterious characters with names like The Insects or The Meat Eaters. Insomnia claws at him. Hour of the Wolf is a man’s feverish nightmare told from the perspective of his loving wife, who is powerless to help him. It seethes with the panicked dread that we are powerless to stop our own self destruction.