We’re officially in the deep, long part of winter and we had a big snowstorm come through this week which means the Midnights really got to business and watched some MOVIES.  A few highlights:

I saw the Soderbergh Solaris a few years ago, but had never seen Tarkovsky’s original, which we picked up over the holidays as part of an excellent B&N Criterion sale (Merry Christmas!). It’s long and quiet and intimate and strange, with spectacular early 1970’s space station settings and swirling landscapes of space ocean at sunrise. Essentially a film about humankind’s encounter with a mysterious extraterrestrial intelligence (see: giant space brain), Solaris floats a few characters and a simple story within big themes about conscience, grief, and memory. This film definitely has a (slow) tempo from a different time – so the ADHD among us may need to split this into a couple settings or really dig in some snowy afternoon when you’re ready to snuggle under a blanket all day – but other than that and Kris Kelvin’s amazing mesh tank tops, it’s just as fresh and stunning now as it was 40+ years ago.

Sean Bean plays the best tragically misguided heroes. Maybe he is typecast at this point, but I swear he was made to be the guy who is trying his best to do what’s right, fighting with all his might for a just cause – and then dying in disgrace as his convictions unravel around him. Black Death features what is maybe the most gruesome Sean Bean death yet (and it didn’t even make the famous Sean Bean death reel on YouTube! There is no justice in the world).

This movie is really good. It’s spooky, dirty, and gory as only a medieval crusader meets Bubonic plague meets pagan film could be and layers on provocative, deep thoughts about religion and fear in a time of crisis.

Charlie Kaufman wrote the screenplay for this movie, which is based on the memoirs of and recorded interviews with TV Producer and alleged superspy Chuck Barris, played delightfully by Sam Rockwell. Creator of The Dating Game, The Newlywed Game, and The Gong Show, Confessions tells the story of Barris’ rise to TV stardom as a producer and game show host and his double life as a CIA hitman during the cold war.  It’s just as bizarre and great as it sounds.

Also on screen this week: 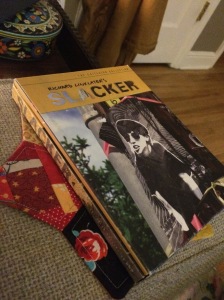 We also paid a visit to our local Half Price Books, and found a lot of great stuff including this beautiful copy of Slacker, one of our all time favorites.

Quick plug: we’re working right now on building inventory for our community film library – so if you or anyone you know is interested in donating movies to the library (any format), please let us know! Contact us via email at midnightmovietrain@gmail.com.

What are you all watching on these snowy February days?